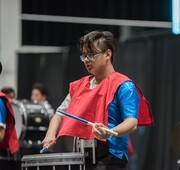 Charles Chua - Battery Coach
Charles Chua graduated from Tustin High school in 2021. He was a 4-year member of both Marching band and Drumline and was captain his senior year. He is currently attending Orange Coast Community College where he is majoring in Studio Arts. He plans on transferring to Cal State Fullerton to continue his artistic journey.

Throughout his time in the Tustin Unified school district, Charles has been awarded for both his musical and artistic achievements. He was awarded the “outstanding musician” medal in drumline for both 2019 and 2021. In 2020, he was also awarded the “outstanding musician” medal for the marching season. Aside from his musical achievements, Charles also uses his artistic abilities that he shares to his community. In 2021, he participated in the TACFA electric box challenge and was one of the winners who were selected. His design is currently displayed in Pepper-tree park in Tustin. In his time in Orange Coast College, a lot of his artwork has been displayed in the art exhibits by his professors. He plans on continuing his artistic endeavors after college.