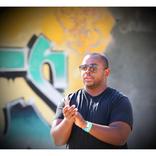 De'Vaughn Ladmirault - Colorguard Caption Head
De’Vaughn Ladmirault graduated from Manual Arts High School in Los Angeles, California.  While in high school he participated all 4 years in the marching band, concert band and jazz ensembles.  As a member of the Music program he marched in the 2005, 2006, and 2007 Tournament of Roses Parade with the LAUSD All -City Honor Band.  After graduating, he attended California State University Northridge graduating with a degree in Music education.