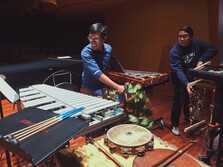 Kristian de Leon was born in raised in San Diego, CA and graduated from Mt. Carmel High School in 2015. In high school he participated as both a percussionist and pianist in the marching band, concert band, jazz band, symphonic orchestra, and select musical theatre and show choir productions. In his junior year, he joined Dark Sky Percussion in their inaugural year of World Class Competition.

After high school, Kristian attended California State University, Fullerton, studying concert percussion under Ken McGrath. He was a member of a multitude of ensembles, including the percussion ensembles, Symphonic Orchestra, New Music Ensemble, and the University Wind Symphony. While his main focus was performance, he also studied composition in addition to his classes, performing his own percussion duet for his first undergraduate recital.

In his third year of college, Kristian acted as the Lead Student Assistant of the New Music Ensemble, working with a multitude of national and international artists and ensembles, including the Los Angeles Percussion Quartet, the Moscow Contemporary Music Quartet, and GRAMMY-Award wining vocal ensemble, Roomful of Teeth.

In his last year, de Leon acted as the Percussion Equipment Manager for the School of Music while also serving as Principal Percussion with the Wind Symphony, collaborating with Director of Bands Dr. Dustin Barr and guest composer Dr. David Biedenbender for a world premier of his first symphony for Wind Band, “What is Written on the Leaves”. The piece was performed as part of Wind Symphony’s performance at their first National CBDNA Conference, held at ASU in February, 2019. In May, 2019, he graduated with a Bachelor’s of Music in Percussion Performance.

Since graduating, Kristian has appeared as a guest percussionist with the Los Angeles Percussion Quartet and will participate in this year’s Sö Percussion Summer Institute, a two-week summer percussion festival hosted at Princeton University.

Kristian has been teaching since 2012, teaching schools, clinics, and private lessons in the Southern California area. This year will be Kristian’s first with Tustin High School.