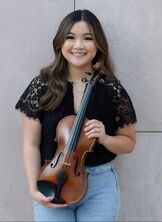 Crystaline Tran - String Coach
Vietnamese-American violinist Crystaline Tran is a native of Southern California who began studying the violin at the age of nine. She has toured and performed in concerts across the globe including cities in Spain, England, Ireland, and Wales. She has most recently performed on stages in Germany and Prague. Crystaline has also played in the Walt Disney Concert Hall in Los Angeles and the Henry and Renee Segerstrom Concert Hall in Costa Mesa.

Crystaline has studied with Andrea Byers and studied chamber music with Joon Sung Joon and Henry Gronnier. She has also studied privately with Iman Khosrowpour and Rocky Lee. She has played in masterclasses for esteemed musicians and pedagogues including Stephen Miahky, Guillaume Sutre, Emmanuel Borok, the Argus Quartet, and Michael Heald. In addition to teaching, she continues to freelance in the Orange County and Los Angeles areas. Recent projects have included live performances of original works for major streaming platforms such as Apple TV, Amazon, CBS, and Paramount.

Crystaline earned her B.M. in String Performance while on full scholarship at the Bob Cole Conservatory of Music (BCCM) at California State University, Long Beach. She is continuing her studies at the BCCM as a graduate student under the tutelage of Moni Simeonov.