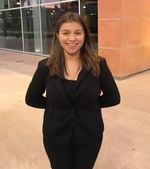 Jacqueline Arias - Woodwind Coach/Music Secretary
Jacqueline Arias graduated from Tustin High in 2016. Her music journey started in elementary playing flute and continued throughout middle school. Then she switched over to alto saxophone in the middle of her freshman year when she was introduced to Jazz Band. She was a member of Marching Band, Jazz Band, Drumline, and Concert Band all four years of high school. She was Woodwind Captain for one year and Drum Major her senior year. Jacqueline has been working with Tustin High School since Fall of 2017.

At Irvine Valley College, she was a part of the 2016, 2017, and 2018 Music Association for California Community Colleges (MACCC) Intercollegiate Bands playing alto saxophone. She was also a member of the Master Chorale for 3 years as a soprano. She performed at the MACCC Intercollegiate Choir in 2019. Although she switched majors from Music Education, she continues to support music programs in her community. She continues her studies in Childhood Development at Irvine Valley College in pursuit of becoming a future educator.

Jacqueline worked with Cal State Fullerton Auxiliary Services Corporation as an instructor at Titans ASES after-school program in Fall of 2018- Spring 2021. She worked with elementary students, grade levels 1st through 5th. She currently works at the Tustin Kinder Readiness Program as a paraeducator for preschoolers since Fall of 2021. She is dedicated to extending her knowledge and creating ideas of what she can do positively as a future teacher, to support each student in their emotional well-being and academic success.

Jacqueline was awarded for her musical and academic achievements. On February 11th, 2016, she received the “Soroptimist International of Santa Ana-Tustin” award for Young Woman of Achievement. Her senior year of 2016, she was awarded with the “Band Director’s Award” at the Tustin High Instrumental Music Banquet. On June 2nd, 2016, she received the "Semper Fidelis Award” presented by the US Marines Youth Foundation and the Marine Corps League in recognition of her dedication and musical excellence as a performing high school student and soloist. In Fall 2017, she received the Arts Scholarship Award and the Ikuemi-Murakami Musical Scholarship at Irvine Valley College.